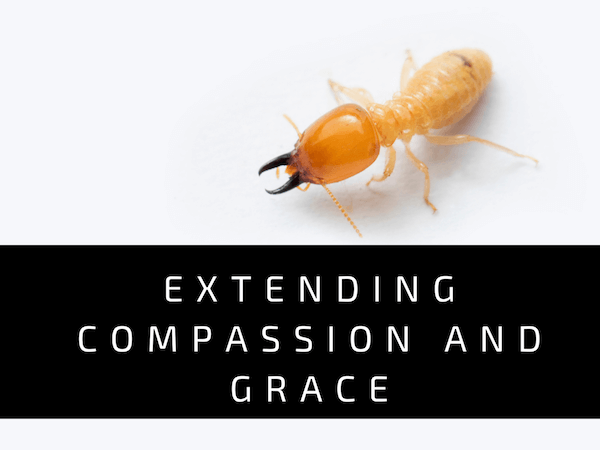 If you have been feeling a little out of sorts with the changes brought about by the COVID-19 pandemic, know that you are not alone. Stress emerges in different ways. For me, I’m particularly stressed when I am not in control of a situation. A situation developed on Sunday that took me WAY out of control.

It is comforting that this happened at home. My family was so supportive and understanding. I was able to let my guard down and tell them what I needed. Had an incident happened in the workplace, I am pretty sure I would’ve tried to hide it. It’s somehow taboo to be wholly human at work.

I implore you to extend extra grace and compassion to YOURSELF and each other. I challenge you to share your wholly human stories to accept that you’re not perfect and you don’t expect others to be either.

Let me start by saying I AM DEATHLY AFRAID OF BUGS. All bugs. Even butterflies.

Sunday morning, the first thing we noticed when we looked out into our backyard was thousands of winged bugs coming up from below the deck. We watched in amazement and horror as they kept appearing. I had never seen anything like it. This shows just a tiny fraction of them:

A while later, we started noticing them INSIDE THE HOUSE. At first, it was just one here or there, but soon I realized they were coming in through the ceiling fan that I happened to be sitting right under. After the appropriate amount – a lot – of freaking out, I looked around and we were surrounded! They were coming in through cracks in the walls and the AC vents as well. I’m not sure if this was the precise moment that I lost my shit, but shit was lost.

Over the next few hours, we must have killed over 200 bugs inside the house, though some seemed like they were already dying. They were EVERYWHERE. I lost my shit again when I saw that they were coming into my closet.

My husband sent pictures to an exterminator who identified them as termites. I did some research and it looks like we were victims of a termite swarm.

I had to get out of the house, so I eagerly volunteered to go to Home Depot. Being armed with a lot of pesticides somehow made me feel better, more in control. I bought 3 different cans and some outdoor bleach; not really sure what I was going to do with the outdoor bleach…

I usually come off as someone who is in control. It’s easy for me to walk into a situation and quickly assess what needs to be done. Those skills served me very well in the last 20 years in operations.

Sunday was not one of those days. Sunday, I lost my shit. Today, I cried (more times than I’d like to admit). Sunday, I was overwhelmed by a situation I could not control. This rollercoaster of emotions I experienced was caused by tiny bugs that won’t kill me. They will only cause financial harm.

There is a great deal of fear in the world right now, not just caused by termite swarms, but by health scares, unemployment, and the lack of certainty and stability. Can you imagine how others might feel facing the fear of uncertainty or even facing bugs that could kill them? What actions would they take to help them feel more in control?

When do you lose it? How can you maintain control? If you want to learn what makes you tick (haha – see what I did there?), take a Predictive Index assessment. I’ll share your reports with you along with some self-help tips!